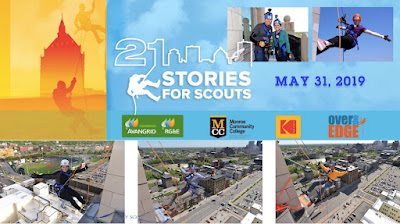 I have always been a fan of proactive publicity. In 2011, my local Boy Scout council decided to enlist the services of Over the Edge Global (https://overtheedgeglobal.com) to create a fundraising event in which people donated $1,000 each to rappel down the side of a 21-story building. I was on the committee that helped pull this together. It was a novel idea at the time and no one had tried it before, especially as a big well-publicized event, in downtown Rochester.

We created a PR plan that enlisted the support of local news anchors and talk show hosts on television and radio. We invited those people to rappel down the building the day before the actual public event. And we set it up as a competition in which those local celebrities competed against each other for who could raise the most money.

Not only did we get people to pay $1,000 apiece to rappel down the side of the building. We had people raising far more than that from friends, family and co-workers to sponsor their rappelling. One guy, “Little Joe” Aiello, who was in his eighties, alone raised tens of thousands of dollars of sponsorships each year for his rappel down the side of buildings, which he did several years in a row until he was 93. But there were also event sponsors. The event itself was covered by almost every local media outlet. And the best part – the media people couldn’t stop talking about the event days before it occurred and weeks after it occurred. Our local Boy Scout council received over a half a million dollars in free publicity the first year alone.

And the best part is the event tied into a real Scouting activity that reinforced “fun” and “adventure,” two key components of the Scout program.

This is just one example of the power of proactive publicity. These blog posts list some others: